According to popular legend, Milo of Croton began carrying a young calf on his shoulders each day.

The story goes that he would pick the calf up on a daily basis and walk around a large stadium.

As the animal grew, Milo also grew stronger. Eventually, he was able to carry a fully-grown bull.

And so the progressive overload principle was born. It refers to the idea that you need to constantly increase the demands you impose on your muscles in order to make them bigger and stronger.

Personally, the whole thing sounds a little far-fetched. A fully-grown bull will typically weigh well over 1000 pounds. That’s a lot more than even the strongest guys in the world today can pick up and throw across their shoulders.

But the story does illustrate what is probably the most obvious way of putting the progressive overload principle into practice – adding weight to the bar while keeping the number of repetitions in each set the same.

For instance, you might be able to squat 100 pounds for a maximum of five reps.

Add 10 pounds in weight to the bar each month, and you’ll be squatting with 220 pounds just one year from now. Continue the process for the next five years and the weight you’re using will have risen to 700 pounds.

Sounds so simple doesn’t it? Adding 10 pounds to the bar each month is just 2.5 pounds a week. That’s easy!

So why are so few people squatting with 700 pounds?

While the progressive overload principle sounds great in theory, it doesn’t work that way in the real world.

If you’ve been lifting weights for more than a few months, you’ve probably realized already that this kind of continuous progress just doesn’t happen – no matter how hard you train, how many supplements you use, or how many motivational quotes you’ve been looking at on Pinterest.

Beginners are often able to add weight to the bar in every workout. But as you get stronger, the rate at which you gain strength will slow down.

This means that every incremental increase in load will need to be smaller, and take place less often.

What exactly do I mean by that?

A beginner in his first few months of training might start out getting strong 5 pounds at a time (i.e. he adds 5 pounds in weight to a particular exercise from workout to workout).

But those gains won’t keep coming at the same rate forever.

If he keeps trying to add 5 pounds every workout, eventually he’ll start to miss reps.

The problem is worse with exercises that involve smaller muscle groups.

As a general rule, the fewer muscles involved in the exercise, the slower the gains in strength will come.

Remember, squats and deadlifts involve a much larger amount of muscle mass than the bench press and overhead press. With the squat, the large muscles in your thighs, hips and lower back are all involved. But with the press, it’s really only the shoulders and arms that are responsible for moving the bar from point A to point B.

All of which means that your strength is probably going to improve at a faster rate with squats and deadlifts than it does with the bench press and overhead press.

So what can you do about it?

If you’ve been training for a while, it’s worth getting some fractional plates. These are tiny plates that allow you to increase the weight you’re using by a very small amount – two pounds, one pound, or even fractions of a pound. This is known as microloading, and is just enough to tease your body into lifting a little more weight than it did last time, allowing you to accommodate the slower rate of strength gains with both the press and bench press.

“As progress begins to slow, i.e. as work sets become harder to do and to complete, or as reps begin to get missed, smaller incremental increases should be used. Smaller jumps waste time at first, but become absolutely essential later. Small plates are necessary for small jumps, and small jumps are necessary for progress.” 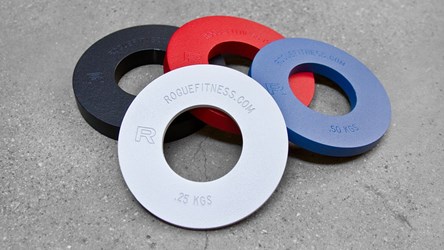 Fractional plates are available from a number of online retailers, including Amazon and Rogue Fitness. They’re not cheap, but they do come in handy and should last a lifetime.

Even small jumps in weight can add up to some impressive gains over a long period of time.

Another popular way to put the progressive overload principle into practice involves doing more reps with the same amount of weight.

Again, this looks good on paper. But it doesn’t always work so well in the real world.

Let’s say that you can lift 100 pounds for a maximum of five reps. While adding a single rep doesn’t sound like much, it constitutes a 20% increase in performance.

Such a large rate of improvement isn’t uncommon in the early stages of a training program, but you won’t be able to keep it going forever.

In contrast, adding 2.5 pounds to a 100-pound load represents only a 2.5% increase in performance, and is far more sustainable over the long term.

Within certain limits, a muscle will grow in direct proportion to the amount of work it’s required to do.

And a very simple way to increase the amount of work your muscles do is by increasing training volume.

Volume is a measure of the total amount of work performed over a given period of time, such as per set, per workout, or per week of training.

If you really want to get “nerdy” about it, the precise way to determine training volume for each repetition is to multiply the weight by the vertical distance it’s lifted.

Adding both weight and repetitions will increase training volume to a degree. But the most popular way to increase volume is to perform more sets for each muscle group.

It’s not a good idea to keep adding sets forever. If there were a perfect linear relationship between the number of sets per workout and subsequent muscular gains, then adding strength and size would simply be a case of increasing the number of sets you do.

In other words, there’s an optimal training volume, above and below which gains in muscular strength and size will be compromised.

Here’s an example of how you might put the overload principle into practice.

Let’s say that your current routine involves 3-4 sets of 5-8 repetitions of a particular exercise.

You start out doing three sets of five. Over time, you add reps until you hit a predetermined number for that exercise.

Another approach that I like is to adjust the weight from set to set.

Normally what happens, if you push close to failure in the first set, is that your performance will drop off in subsequent sets. So if you’re doing three sets of 5-8 reps, you might hit eight reps in your first set, seven in your second, and six in set three.

If you wait until you hit eight reps in all three sets before adding weight, you can end up “stuck” lifting the same weight for months on end.

Instead, add weight as soon as you hit the upper limit of a particular rep range.

In other words, rather than adding weight only when you can do three sets of eight reps, you add weight as soon you hit eight reps. Conversely, if you’re not able to do five reps, lower the weight for the next set.

I should also point out that it’s not necessary to add weight to every single exercise all of the time in order to make your muscles bigger.

In some exercises, particularly the single-joint “isolation” movements, you simply won’t be able to add weight beyond a certain point. Nobody is doing lateral raises or concentration curls with 200-pound dumbbells. Muscle damage and metabolic stress, both of which play a key role in stimulating muscle growth, can be achieved without lifting very heavy weights.

Beginners will often improve from workout to workout for months on end.

But once you’ve moved past the beginner stages of training, progress will come not from workout to workout, but from week to week, then from month to month, and eventually a lot more slowly than that.

At first, progress is relatively easy. But as you move closer to your goal, taking the next step becomes more and more difficult.

“As is true with most systems that improve with accumulated change, the farther away from the predetermined limits of potential improvement the system is, the more easily and rapidly the system improves,” explains Mark Rippetoe in Strong Enough.

“The closer you get to the limit, the harder it is to get closer, the longer it takes, and the more it costs in terms of effort and (usually) expense.”

So be prepared for the fact that your progress in the gym will slow down over time.

Even the best training program won’t change the fact that every step on the path to physical greatness will be a little slower and harder than the last.

Putting the progressive overload principle into practice involves training with a purpose. Having goals to reach, as well as a plan to reach those goals. Do the same exact same workout, with the same weight, sets, repetitions, for months on end, and your body will never change.

If regular training programs always seem to leave you with nagging aches and pains in your knees, shoulders, elbows or back, I’ve put together a complete training program that shows you how to put on muscle without wrecking your joints.

It’s called MX4, and you can use it to maximize your rate of muscle growth while you gain weight, or to retain (or even gain) muscle mass while you chisel away the fat.

If you want to get strong in the big lifts like the bench press, squat and so on, this isn’t the program for you. But if your results in the gym have dried up, and you’re just winging it with no real plan to follow, MX4 is well worth looking into.

For daily email tips that will show you simple, straightforward, science-backed ways to get in shape, enter your email address below and hit the submit button.