Many people believe that in order to maximize fat loss, you should avoid eating fat and carbohydrate in the same meal.

Protein and fat is fine. So is protein and carbohydrate.

But if you eat fat while insulin levels are elevated from the carbohydrate, your fat cells are going to fill up faster than Samson losing his strength after a visit to the barbers.

The first time I came across the idea was in a French book called The Montignac Method, which was published back in the late 1980’s.

Having been regurgitated by various authors over the years, the theory is one that clearly makes for interesting reading. The only problem with it is the not insignificant amount of research pointing to the fact that the whole thing is actually complete nonsense.

For one, the fact that a meal contains little or no carbohydrate is no guarantee that it won’t affect insulin levels.

Eat protein and fat together, and there is still the potential for insulin levels to rise. In fact, some protein-rich foods raise insulin levels to a greater extent than their high-carbohydrate counterparts. That’s despite little or no change in blood sugar levels.

FREE: The Flat Belly Cheat Sheet. This is a quick guide to losing fat, which you can read online or keep as a PDF, that shows you exactly how to lose your gut and get back in shape. To get a FREE copy sent to you, please click or tap here to enter your email address.

The figure below comes from scientists at the University of Sydney. It shows the insulin response to a fixed amount (239 calories) of a particular food over a two-hour period [2]. White bread was the reference food with an insulin score of 100%. 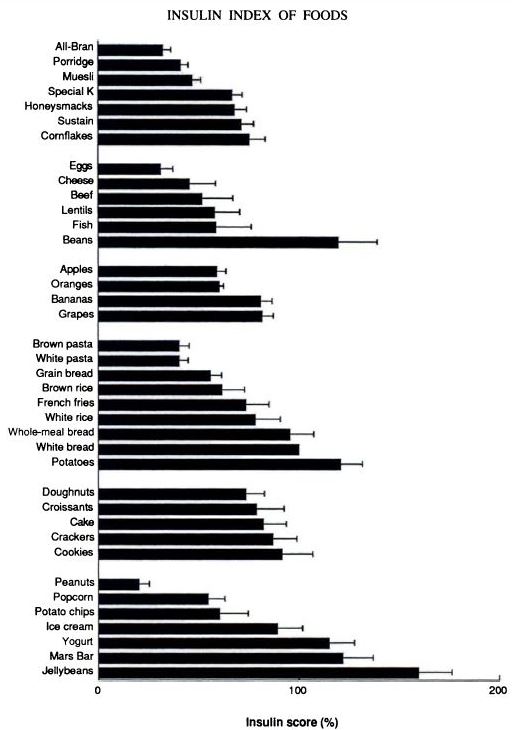 As you can see, even foods containing very little carbohydrate (beef, eggs, fish and cheese) still trigger a substantial rise in insulin levels.

All of which is largely irrelevant, because fat doesn’t need insulin in order to be stored anyway.

There’s a particularly potent hormone that goes by the name of Acylation Stimulating Protein (ASP), which does a pretty good job of storing fat without the need for insulin [3].

ASP is activated by substances called chylomicrons, which carry fat in your blood after a meal. Which means that any time you eat fat, even in the absence of protein or carbohydrate, there is the potential for it to be stored.

If your overall diet for the day leaves you in an energy deficit, which means there’s a mismatch between the amount of fuel your body needs and the amount it gets from food, stored fat will make up much of the difference.

The only study I could find to test whether separating carbohydrate and fat makes any difference as far as weight loss is concerned comes from a Swiss research team based at Geneva’s University Hospital [1].

The trial looked at the effect of two diets on weight loss in a group of hospitalized men and women. Diet one (the dissociated diet) involved separating carbohydrate and fat. Diet two (the balanced diet) did not.

Both diets provided the same number of calories as well as identical amounts of protein, carbohydrate and fat.

If eating carbohydrate and fat together increased fat storage, you’d expect to see a slower rate of weight loss in the balanced group. But that wasn’t the case.

In other words, it was subjects in the balanced group who lost the most weight, although the difference wasn’t large enough to reach statistical significance.

I’ve seen it argued that the real benefit of separating carbohydrate and fat is that it forces you to stop and think about what you’re eating. It’s a method for enhancing compliance more than anything else.

The only true requirement for weight loss is a calorie deficit. If separating carbohydrate and fat makes it easier for you to achieve that, then by all means carry on doing it.

For me, it’s an entirely pointless rule that you’ll do just as well to ignore.

It's a quick guide, which you can read online or keep as a PDF, that tells you exactly how to lose your gut and get back in shape. To get a FREE copy of the cheat sheet sent to you, please enter your email address in the box below, and hit the “send it now” button.