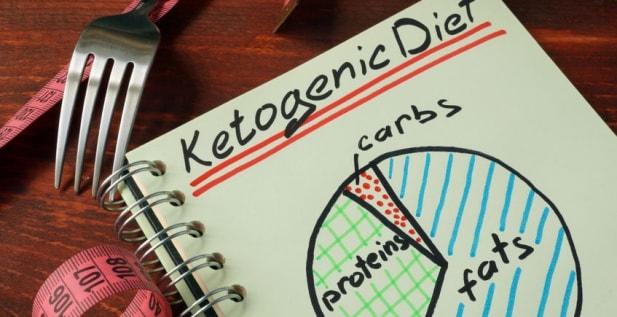 The idea behind the so-called “lazy keto” diet is that you don’t track or limit calories at all. Nor do you count how much protein or fat you’re eating.

All you do is focus on keeping your carb intake under 20 grams per day, which will put you in ketosis.

Does lazy keto work? Or do you still need to go “strict keto” and count calories if you want to lose weight?

Lazy Keto: Does It Work?

That’s because you need a calorie deficit to lose fat. If you’re eating too many calories, irrespective of where those calories are coming from, you won’t lose any fat.

When they make the shift to a ketogenic diet, a lot of people do end up eating less as a result.

For one, cutting out a major macronutrient from your diet means there are fewer foods to choose from, which goes a long way towards simplifying your dietary choices.

Low-carbohydrate diets have also been shown in a number of studies to decrease hunger and reduce the desire to eat [1, 2].

Many of the foods typically consumed on a low-carb diet tend to be rich in protein. Protein is the most satiating nutrient out there, and does a better job of filling you up than carbohydrate or fat [3].

Ketones, the production of which are ramped up on a low-carbohydrate diet, also appear to suppress the appetite [4]. This gives ketogenic diets an “appetite advantage” that extends beyond their protein content alone.

In one trial, researchers compared a moderate-carbohydrate diet, where carbohydrate provided 35% of total calories, with a ketogenic low-carb diet [5].

Both diets were relatively high in protein, which was set at 30% of total calories.

When they were on the ketogenic diet, test subjects reported feeling less hungry than they did on the moderate-carb diet. That’s despite the fact that protein intake was identical. They also ate around 180 fewer calories per day, which led to a couple of pounds (one kilogram) of extra fat being lost.

SEE ALSO: The Flat Belly Cheat Sheet. This is a “no waffle” PDF, written in plain English, that shows you exactly how to get rid of belly fat. To get a copy sent to you, please click or tap here to enter your email address.

But to repeat, losing fat requires a calorie deficit. And while low-carb diets do have the potential to reduce your food intake, simply cutting your carb intake to 20 grams per day is no guarantee that weight will be lost.

Let’s say you go on a lazy keto diet. Your appetite goes down, and you end up eating less, which puts you in a calorie deficit. As a result, weight is lost.

If all you’re interested in is losing weight, and you’re not too bothered about where the lost weight comes from, the lazy keto diet can work just fine.

But, if you want to improve your body composition (by which I mean having more muscle and less fat), it’s not going to be enough.

Building muscle, or even just holding on to the muscle you have while losing fat, requires two things – resistance training, and a sufficient intake of protein.

Without enough protein in your diet, you run the risk of losing muscle as well as fat.

However, a lot of keto dieters will restrict their protein intake, worried it’ll kick them out of ketosis. So, if you’re trying to build muscle on keto, do you need to put a cap on the amount of protein you eat?

For therapeutic ketogenic diets, where relatively high levels of blood ketones are required, both protein and carbohydrate intake need to be restricted.

Diets designed to treat children with intractable epilepsy, for example, typically derive less than ten percent of their calories from protein [6].

However, most studies show that you can get all the protein you need to maximize muscle growth without kicking yourself out of ketosis.

In one study, a group of highly-trained ultra-endurance athletes on a low-carb diet were still in ketosis despite eating around one gram of protein per pound (2.1 grams of protein per kilogram) of bodyweight per day [7].

It was much the same story in a group of men lifting weights three times a week and eating a low-carb diet providing 0.7 grams of protein per pound (1.6 grams of protein per kilogram) of bodyweight [8]. Test show that blood ketone levels were around 1.0 mmol/L after six weeks, indicating a state of ketosis.

The muscle-building benefits of protein appear to flatten out at around 0.7 grams per pound (1.6 grams per kilogram) of bodyweight per day. So it’s still possible to follow a low-carb diet and stay in ketosis while getting enough protein to support muscle growth.

Lazy Keto: Is It Sustainable?

The lazy keto diet is certainly “lazy” in the sense that it doesn’t involve tracking the amount of fat, protein and calories you eat. However, restricting your carb intake to 20 grams or less per day is no easy task [9].

The other day, I came across an article by a guy on one of these “dad bod” challenges.

He’d been following the keto diet for almost three weeks, but was tempted to take a bite of his toddler’s leftover doughnut, and had been waging “inner war” with himself as to whether or not he should do it.

After an hour of shilly shallying, he decided to take the plunge and eat the doughnut. Here’s how he describes what happened next:

“It’s heaven – the forbidden doughnut. A rush of energy surges through my body. It feels like someone just switched all the lights on in my brain. I’m 90 percent certain I could go outside and lift up a lorry.”

Then he drank a beer and ordered a pizza. And just like that, the diet was over.

Some folks seem to do just fine on keto. But Doughnut Guy, in his own words, had “never felt worse.”

For a diet to work, it has to be both effective (i.e. it leads to fat being lost) and sustainable.

Keto is certainly effective in the sense that it can lead to fat being lost. But, for a lot of people at least, it’s not sustainable. You have to monitor your carbohydrate intake very carefully.

When you know you can’t have something, it’s human nature to want it all the more. So if you know that you’re “not allowed” to eat carbs, carbs are exactly what you’re going to want.

Why You Don’t Have to Go Full Keto

There are many good things to be said about low-carbohydrate diets. The focus is usually on eating simple, wholesome, nutrient-dense foods that tend to fill you up on fewer calories. They also encourage you to steer clear of most hyper-palatable, energy-dense “junk” foods.

However, there is a lot of hype about keto, and it can be hard to separate the legitimate benefits from all the half-truths and bullshit.

Personally, I don’t use ketogenic diets. Nor do I recommend them as a starting point for anyone who wants to lose weight. As far as I’m concerned, you don’t have to go “full keto” to get the benefits of restricting your carb intake.

In one study, switching to a paleo-style diet, which provided around 130 grams of carbs per day, was still enough to reduce appetite and food intake compared to a Mediterranean-style diet [10]. Even though subjects on the paleo-style diet ate fewer calories, there was no difference in satiety ratings between the two.

A lot of people do just fine with a moderate intake of carbs. But restricting carbs even further leaves them struggling in the gym with low energy levels. They feel tired and mentally fuzzy, the quality of their training suffers, and they don’t stick with it for very long.

Keto isn’t a magic bullet. Although some studies do show a short-term benefit to low-carb diets, longer trials show little difference in weight loss whether your diet is low in carbs or low in fat [11].

That said, no single diet has a great long-term track record. Losing weight and keeping it off is hard work. There’s no compelling evidence that points to any one particular way of eating as being vastly superior to all others when it comes to successful long-term weight maintenance.

While the term “lazy keto” is relatively new, the idea of limiting your carb intake to 20 grams per day certainly isn’t. The Induction Phase of the original Atkins Diet, for example, recommends that you stay under 20 grams of carbohydrate per day.

What’s more, there have been various studies done over the years, some going back to the early 2000’s, which capped carbohydrate intake at 20 grams per day, with no limit on daily calorie intake [11, 12, 13]. So a lot of this “lazy keto” stuff is just old wine in a new bottle.

To a lot of people, lazy keto and regular keto are the exact same things. One of the main selling points of low-carb diets is that you eat less without counting calories and tracking everything. In that sense, lazy keto is no different to regular keto.

My guess is that anyone following a “strict” keto diet is in the minority. Most will be taking the lazy keto approach anyway.

If you want to experiment with a ketogenic diet, by all means go ahead. Some folks seem to do just fine on keto, and it’s worth a try if nothing else has worked so far. Just be aware of the downsides, and keep in mind that you don’t have to go “full keto” in order to lose fat.

It's a “cut the waffle and just tell me what to do” PDF that tells you exactly how to get rid of belly fat. To get a copy of the cheat sheet sent to you, please click or tap here to enter your email address.